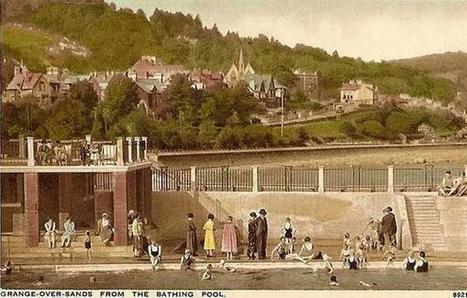 And you, what do you say?

Me? Well, I say lie-do for no reason other than that’s how it’s been all my life. Since time immemorial one might say… or maybe not, for that date is said to be 1189, the time of King Richard I. You will remember him I’m sure – Richard Coeur de Lion or Richard the Lionheart. Truth be told, I’m not quite that old, not yet!

Way back (my euphemism for more years than I care to remember), I spent many a sunny summer afternoon with friends at the lido at Brockwell Park in Herne Hill, near to where I used to live down south in old London town. Designed by Harry Rowbotham & T. L. Smithson and opened in 1937 the lido was closed in 1990 as a result of cost cutting measures (thanks for that Lambeth Borough Council). Luckily a local campaign was successful in saving the lido and it remains open to this day. Now a National Heritage Grade II listed building this treasured link to my past remains intact.

Well, what has all this got to do with life in a small town? I’ll tell you… We too have a lido which was opened in the 1930’s, is also Grade II listed and is special for its architectural and historic interest. What is more, our lido is the only Art Deco example in the north of England and is one of only four in England as a whole. Sadly though our lido is decayed, neglected and looking very sorry for itself. It wasn’t always thus… 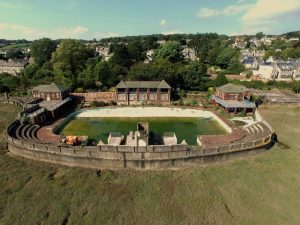 Constructed in 1932, to designs by Bernard Smith, our lido was once a place of fun, frolics and laughter. Inter-war lidos characterise the period in their combination of design flair, outdoor leisure and devotion to the cult of sea, sun and fresh air. Our pool was unheated and filled with filtered water taken from the sea at high tide – we’re hardy folk up here in the north!

Times change though and partly due to the decline in numbers holidaying in Britain the lido closed in 1993. Also, since the lido was built, shifting tidal currents have moved the sea a significant distance to the east and it is now separated from the lido by a broad area of marshland, which covers the former beach. Such factors can spell doom and the lido was faced with the pool being filled with concrete and the site transformed out of all recognition.

Community is a powerful thing and when combined with history and nostalgia oftentimes becomes the catalyst which can be a force for change. In recent years lido pools have seen a huge resurgence in popularity. Those that have been nurtured, maintained and developed have seen great financial and social return. With imagination and enthusiasm, these Art Deco gems of the 1930’s are returning to grace serving local communities and visitors alike. Can this also be the vision for our lido – well, simply put, yes it can!

A Save Grange Lido action group was established in 2018 and is receiving massive local and national support. The group is developing a realistic business plan for restoration, ongoing upkeep, attraction of new businesses and mixed use of the lido site – all with the original pool at its centre. It is believed that Grange Lido, with it’s unique coastal setting, Art Deco heritage and social & community importance can be returned to its former glory, making it an attractive and viable focal point and tourism destination for our town.

Grange Lido – The future? (with thanks to Save Grange Lido)

Plans for regeneration include the restoration of the lidos iconic mushroom shaped 50 metre six lane swimming pool together with the construction of a heated 25 metre pool alongside a paddling and play pool. The complex would also boast a community space, restaurant, sauna, steam room and shop. The plans are exciting, the word is spreading and, trust me, it will happen.

I am told some 3.5 million people live within a 50-mile radius of our lido, and the Lake District itself attracts in the region of 40 million visitors each year. This catchment and the visitors to our town provide a substantial potential market for the redeveloped lido site.

Although sad and desolate at the moment, the lido was featured recently in the closing scenes of an episode of the gripping television drama The Bay – well worth watching!

Well, I hope I’ve piqued your interest and, no doubt, you will be hungry for more news of this wonderful project. Worry not – I’ll update you in the weeks and months to come.