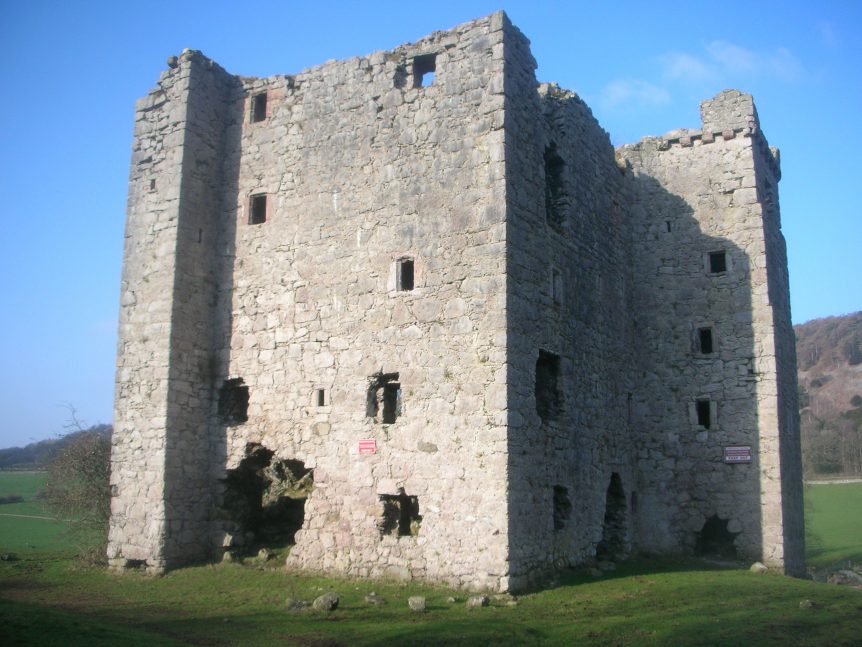 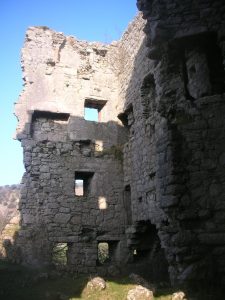 It’s not in Cumbria but in Lancashire but I won’t hold that against it at all.

Along with neighbouring Arnside, Silverdale sits across the bay from my small town and can be seen clearly from my chair as I write this.

They sit together snugly on the coastline of the bay in an area designated as an area of outstanding natural beauty.

It is indeed a beautiful place, an extraordinary place – thanks to it’s rich diversity of habitats and wildlife. Its deciduous woodlands, limestone grasslands and coastal salt marshes are enclosed by low limestone hills creating a perfect environment for rare butterflies and marshland birds.

Yesterday it was a fine early spring day, ideal  for a walk, and the call from Silverdale could not be ignored.

To the top of hills down to the shoreline, I spent several happy hours in the company of friends as we wandered about.

Along the way we came across Arnside Tower.

Arnside Tower is a Pele Tower or, more properly, a Tower House.

In the Middle Ages, whenever the English King’s attention was distracted, the Scots lost no opportunity of invading northern England. Castles and Pele Towers were constructed to provide protection, and in north-west England between the River Lune and the Scottish border over one hundred were built. Peles were smaller, less well fortified, then castles. They were intended to counter lightly armed raiders rather than to withstand a siege by a properly equipped army.

Arnside Tower was built by the De Broughton family around 1340. It was damaged by fire in 1602, but was rebuilt and survived intact until 1690. In 1815 it was sold to Daniel Wilson of Dallam. In 1884 one corner fell in a great storm. Much of it is still standing, although it is gradually disintegrating. Unfortunately, little or nothing is being done to halt the process of decay.

Pele Towers tended to conform to a pattern. They were usually three storeys high, but Arnside had four. The ground floor contained the dairy and store rooms. Stone steps led to a first-floor entrance, with a heavy oak door and a protective iron grille. Fire-places and latrines were built into the walls, which were up to 10 feet thick. A spiral staircase connected the floors.

Arnside Tower occupies an interesting position. It is sited on a saddle, or col, between Arnside Knot to the north and Castlebarrow to the south. To the west the land slopes to the shore, and on the east to the Arnside and Silverdale Mosses. It is within visual or signalling distance of several other Peles in the area, e.g. Hazelslack, Borwick, Beetham, Levens, Sizergh and Allithwaite (across the sands).

Until the next time.