Well, that went quickly. No sooner as I post to wish everyone a Happy New Year, January ends, and February is upon us. Time seems to pass quickly these days. In my youth, pre teens, time gave the impression it went very slowly. Was it the same for you? Perhaps it’s an age ‘thing’ – as we get older we become more conscious of the sands of time ebbing away, never to be seen again.

I remember looking forward to the end of Summer Term when in Junior School. Don’t ask me how long ago that was, for I fear I’m unwilling to tell you, ‘tis a state secret. Anyway, the prospect of six weeks of freedom always filled me with joy, notwithstanding the fact the shops always appeared to be full of ‘Back to School’ merchandise the day after the holidays started!

I’m glad schools, whether they be in London, Cumbria, or anywhere else in England, still have ‘terms’ – it would be wrong, I think, for them to be renamed ‘semesters’.

Back then, most of the six weeks were spent roaming the streets of the suburban south London neighbourhood of my youth – I’m an ‘Offcomer’ in these parts as you may know. How different the busy streets, and built up areas were back then, compared to the wide open Cumbrian countryside which surrounds me now. Adventures, were aplenty during those halcyon times, but how diverse could they have been here in The Lakes?

We were lucky though, in those far off days. My loving parents always ensured we had a week long holiday by the sea. It would have been a struggle for them, but they never failed. Way before package airline holidays to Europe, a caravan or chalet on the coast of north Kent or Sussex were our favourite destinations. Once or twice we ventured further, Somerset, one year, Cornwall another, I have fond memories of them all.

I was reminded, when recently reading about the wreck of the SS Richard Montgomery, of boat trips we would take from the pier at Sheerness. Pleasure craft full of laughing and chattering children, along with a smattering of adults, would bob about and weave amongst the masts of the sunken ship. We didn’t seem to care that the vessel still held 1400 tonnes of TNT laden bombs in its holds!

The wreck of the SS Montgomery | Photo credit James Bell/Alamy

For almost 80 years, the wreck has laid rusting just over a mile off shore. The school of thought, back then, was that the vessel was best left untouched. It was believed too dangerous to disturb it in order to recover the munitions. That may change.

Although the wreck is in a ‘stable’ condition, it is felt now an effort should be made to make it safe. There is a fear that, if it explodes, not only will it raze the nearby town but it would also create a 300-metre wide column of mud and metal shooting 3 kilometres into the air, and a tidal wave which would race upstream along the River Thames and damage most of low lying London.

The Department of Trade and the Royal Navy are looking at ways to make the vessel safe – soon, like January, the Montgomery will be gone.

No longer can children take a boat ride to the wreck – there is now an exclusion zone around it. Sad perhaps, but, then again, perhaps not.

Talking of February, I cannot but fail to notice we are at the celebration of Imbolc. I’ve written of it before in my 2020 post – Woops – There’s been some slippage!

Regular readers… Oh my goodness, I’ve reached the stage of using the phrase ‘regular readers’! Who’d have thought that when I started recording my musings here way back in 2016?

Anyway, regular readers, may be aware I’m a follower of ‘the old ways’, which means, among other things, I mark the turning of the Wheel of the Year and note the eight festivals of its rotation.

Imbolc takes place from 1 February through to sundown on 2 February. Imbolc is a Celtic festival, marking the halfway point between winter solstice and the spring equinox, and celebrates the emergence of life in the world which surrounds us. It’s a wonderful chance to get crafty with your family and enjoy the wonders of new life.

Imbolc (pronounced IM-bolg or IM-bolk) is Old Irish for ‘in the belly.’ It’s also known as Oimelc, Lady Day, and, in Christianity, Candlemas or St. Brigid’s Day. Traditionally, Imbolc represents the beginning of spring and the time when the first lambs are born. It’s the time of the year associated with pregnancy, and is the time to honor the fertility goddess Brigid.

As the days lengthen bit by bit. Imbolc is around the time this change really starts to show. The end of the day has noticeably more light, even though the trees and grass are still in winter’s grip.

The goddess Brigid (pronounced Breed or Breej) was the daughter of Dagda, the oldest god in the Tuatha dé Danann or Celtic pantheon. Brigid is a fertility goddess. She rules the fire of the hearth as well as the fire of imagination through poetry. She also blessed other skills that required the use of fire, like blacksmithing. 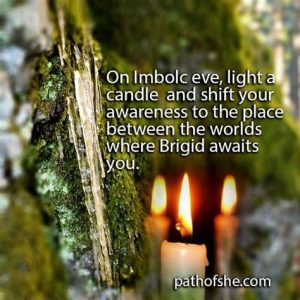 When Christiainity came to Ireland, Brigid became Saint Brigid, complete with a human history beginning around 450 A.D. in Kildare, Ireland. As a saint, she was known for feeding the poor and healing the sick. A perpetual flame that was tended for centuries by pagan priestesses, and later, by Brigidine nuns, burns in the town square of Kildare.

So, as The Wheel turns, I wish you a joyous Imbolc and, who knows, maybe I’ll muse some more once Ostara is upon us. How will I celebrate? Well, maybe I’ll plant some seed to represent my hopes, ideas and dreams for 2022. Then again, maybe I’ll bake a cake!

Sieve the flour, salt and baking powder into your cauldron or a large bowl and then rub in the butter.

As you do this think of family and friends, think of the small personal things that you would have them benefit from as Spring flows into their lives.

Visualise light flowing into the mixture, fire of truth and illumination, if you wish, use a rhyme.

Stir in the seeds and sugar and then the eggs, mix with just enough water to give a mix that softly drops off your spoon.

Stir in patience for the coming Spring, this is still a time of waiting.

Pour the mixture into the prepared tin and bake for one hour, then reduce the temperature to 375F/175C and cook for a further half to one hour until the cake is golden brown and well risen. Leave to cool in it’s tin.